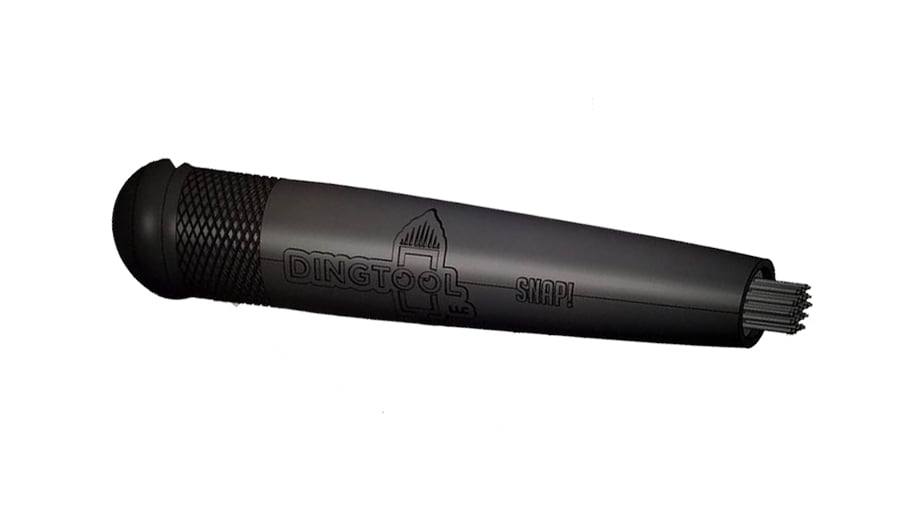 Unlike the paintless dent repair’s decades-old reliance on traditional techniques, which only offer a single point of contact with the dent, Ding Tool’s product lineup leverages a proprietary method that delivers up to 19 points of contact with the dent, with the ability to fine-tune the amount of spring-loaded force delivered. See live demos of the tools and 3D printer technology at Booth #52230 at SEMA through Friday, Nov. 7.

A 25-year veteran of the industry, Ding Tool Founder Duane Langenfeld needed greater efficiency and higher throughput in his paintless dent repair shop. Unable to find a solution in the marketplace, he developed his own. Partnering with B9Creations, a provider of high-precision additive manufacturing solutions in nearly 70 countries worldwide, Langenfeld took his design to prototype and end-use production in record time – with record results.

“Even if this tool is given to a new technician, they’ll gain a 20 percent to 30 percent increase in speed. I fixed 10 dents in a roof in 30 seconds with these 3D printed tools, moving seamlessly from prototype to final production units. Using B9Creations Rugged - Nylon 6 engineering material, these functional end-use tools hold up to repeated hammering, taking out dents without leaving scars on the paint or the metal,” said Duane Langenfeld.

With an established reputation as an innovation engine at the forefront of additive manufacturing, B9Creations professional 3D printing solutions enable a variety of high-precision applications for direct and OEM customers, serving brands from Proctor & Gamble to 3M and B. Braun Medical Inc.

See the dent repair tools in action, fixing dents in under 8 seconds, with the Ding Tool Launch Video, and more demonstrations of the Snap! lineup here.

As a global provider of professional 3D printing solutions, B9Creations has become the industry leader in production, speed and value. It now stands as the additive manufacturing market leader in high-precision applications such as jewelry, prototyping and manufacturing, research, medical devices and model making. B9Creations serves customers and certified dealers in 66 countries around the globe. Find us online at b9c.com, on Facebook, Twitter, Instagram,YouTube and LinkedIn.