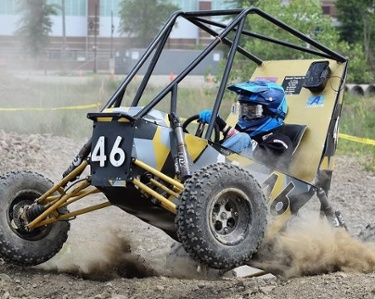 The Baja SAE team is comprised of Mines students who design, manufacture, test, and race an off-road vehicle. Each year, the team competes against universities from around the world in multiple events at Baja SAE Competition – including a tech inspection and brake check, a maneuverability hill climb event, and a four-hour endurance race.

“B9Creations’ 3D printing solutions aided in our team’s success at this year’s competition by not only allowing us to cost-effectively prototype critical parts of the vehicle, but by enabling us to create sturdy end-use components as well,” said Ethan Hartmann, a student on the Baja SAE team at Mines.

Featuring low modulus, high elongation, and high impact strength, Rugged – Nylon 6 is tough enough to stand up to the rigors of long-term, real-world use, replacing traditionally injection molded components, making it the ideal material for the project. Rugged - Nylon 6 is well-suited for functional testing, and the Baja SAE team leveraged the material to verify their design for the Baja vehicle’s spline patterns, which require extreme precision to function properly – a level of accuracy Mines' Baja SAE team discovered could easily be achieved with B9Creations’ Core Series 3D printers.

Aside from prototyped spline inserts, 3D printed parts of the Baja vehicle also include a 4wd activation lever, various spacers and bushings, gas and brake pedals, as well as mounting for electronics.

“We are proud to partner with South Dakota Mines’ Baja SAE team on this project, and on future projects as well. It’s exciting to see our technology being used in a new way, and we can’t wait to see how the team leverages it to design and build their competition vehicles for years to come,” said B9Creations CEO Shon Anderson.

As a global provider of professional 3D printing solutions, B9Creations has become the industry leader in production, speed, and value. It now stands as the additive manufacturing market leader in high-precision applications such as medical, jewelry, prototyping and manufacturing, research, and model making. B9Creations is headquartered in Rapid City, South Dakota in the United States, with offices in Dallas, Texas and Denver, Colorado, and serves customers and certified dealers in nearly 70 countries across the globe. Find us online at b9c.com, on Facebook, Twitter, Instagram, YouTube and LinkedIn.