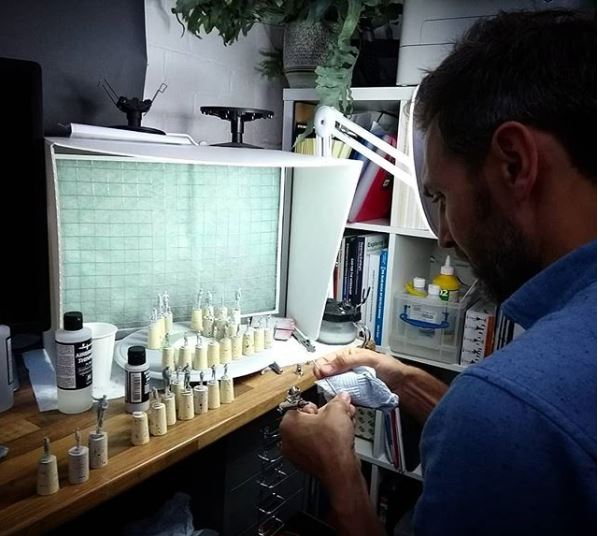 See A Model Maker's Journey From Startup To Showtime

Though Alan Buttler's passion for model making has been lifelong, making a business of it was a bit more accidental. A bold move to invest his life savings in the B9Creator 3D printer helped launch his company, Modelu 3D, to great acclaim. Now, with his recent upgrade to the B9 Core Series, Alan sees nothing but success ahead.

As a child, Alan would scour London’s archives for architectural plans to base his models on, with a dogged persistence that soon grabbed the attention of former employees whose stories brought those models into historic relief. That’s when model making began to take on a life of its own. “It was so cool to tell the story of these two guys whom you’d just pass in the street, but have a life’s worth of experience and all sorts of skills.”

Though Alan’s interests would take a turn, morphing into a career as an IT manager, he never lost sight of his first passion, albeit more as a stress-relieving hobby than a full-fledged pursuit.

Eventually, the stress of his career became so serious, his doctor told him to take a mandatory three-month reprieve.

A reprieve that led him back to his roots.

INVESTING HIS LIFE SAVINGS IN A NEW LIVELIHOOD

“I went back to my mother’s cottage in rural Wales, and during that time my mom was diagnosed with cancer. I decided to remove all the stressful things in my life, including my job. I moved back to Wales and used all of my savings to buy a B9Creator v1.2. I was determined to make a living with it.”

And a living he made, with his newly founded company Modelu 3D.

“I scanned a few friends, printed them out on the B9Creator. And I printed some railway items nobody had been able to replicate. Very quickly I started getting noticed by other model makers in the United Kingdom, Australia, Europe, and Canada. And in a few weeks I was in magazines, invited to all sorts of expositions.”

As success upon success multiplied, Alan bought a second B9Creator just to keep up with demand – and for two and a half years ran both machines flat out, printing at minimum 100 hours a week, recoating two vats twice a week, and calibrating as often as required.

“When the B9 Core Series came out, it was an unbelievable relief. In the first year, I did 35 exhibitions, turned down 20 more, and did a number a TV-related jobs along with wholesale orders, some 3,000 figures or more. With the B9Creator, that would take me an afternoon. Now with the B9 Core Series, I can get them out so much faster, especially with the high-speed Gray Resin.” 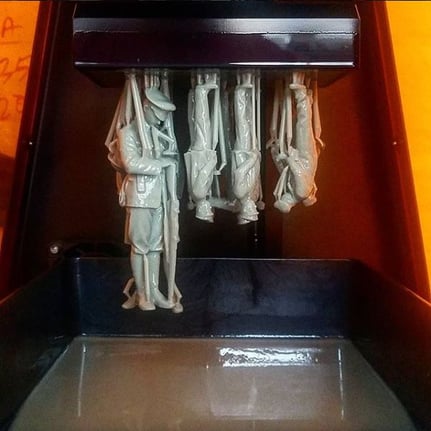 WHO ARE YOUR CUSTOMERS?

The majority of my customers are people who make highly detailed model railways. Every single person I scan actually does the job for real. That is why they are so realistic.

I could be approached by a company making an F35 Jet, whose pilot was originally hand-carved out of wax. So I teach some of the most respected model makers in the country, now retired, how to use CAD programs to make their models digitally and 3D print them.

I’ve also been approached by filmmakers doing documentaries, like one on a band called XPC, who wanted the band scanned and printed out in 176th scale, before the film aired on Showtime in Canada and the US.

I’ve scanned and printed contestants on “The Great British Bake Off,” have had families commission me to scan and print their loved ones (like one owner of a massive construction company and a Lord!), and even a statue of WWII soldier.

WHY IS IT IMPORTANT YOU BUILD MODELS OF REAL PEOPLE?

When you design a figure by hand out of wax, which is traditionally how it’s done, it is very hard to keep things in proportion. The heads are a lot bigger, and they look like caricatures. The proportions of my models were the first differentiator, and I’ve stuck to the markets where realism and accuracy are paramount. That’s what B9Creations 3D printers have given me.

Part of what makes real people so great is they bring their experiences into what they do. Every one of my models has intent. It looks more natural, and they bring their experience of what they do day-to-day. When you make models, you want to look at a scene. And after looking at it for a while, then your eye is drawn to them, to find a story within the scene – especially when you position three models together.

WHERE DO YOU SEE YOURSELF IN 5 YEARS?

When I was making architectural models, I realized there are so many things you can’t find on a shelf. You need 3D printing. That’s what served me well in the railway model industry and all my exhibitions.

Now I’m looking to move into new markets like military and aviation, where the B9 Core Series will come into its own with speed and accuracy.

I’d be keen to do more TV and film work, where each one is completely different, and working with model manufacturers to design their models prior to release.

WHY UPGRADE TO THE B9 CORE SERIES 3D PRINTER NOW?

Part of it has been the wholesale orders, and how hard we’ve pushed the B9Creators. We’ve been lucky that the B9Creators have had no issues considering what I’ve done with them. But this was the direction I wanted to push the business in, and the speed of the Gray Resin was the biggest factor.

I wanted a machine to reflect the status of the business, that can be pushed daily and that has industrial-quality components.

HOW DID IT FEEL WHEN YOU FIRST OPENED YOUR B9 CORE BOX?

It felt like it was in another league all together. You can have your test print done in 14 minutes. For me and the business, the investment in this 3D printer is sizeable, and I know it will pay its way.

I thought it was slick, the speed and simplicity of it. I was amazed by the printer – and the new software features were a godsend.

YOU’VE BEEN WITH B9CREATIONS FOR YEARS NOW. WHY?

The relationship was the number one reason I’ve stayed with B9Creations. In the past, I’ve been able to email directly and within a week there is a software update. You just can’t get that anywhere else. It was having the comfort and knowledge that if things went pear-shaped, I had a route to ask for help. 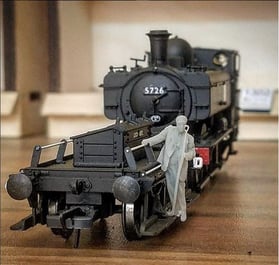 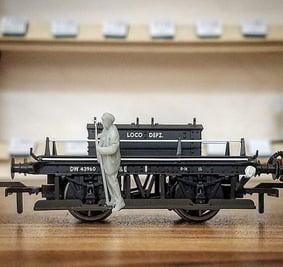 Book time with a B9Creations representative to see how 3D printing could fit into your business.

To see the speed and resolution of the B9 Core Series, yourself, request a sample.